Hello from Guatemala. Today was our first day of work and it went very well. We started with breakfast and a devotion before heading out to do our assigned tasks. I was with a group that was building houses and felt lost for the first hour we were there. Most of the guys have been here before and knew what was going on. Everyone was very patient with the rookies and when we finally got the hang of it I was able to be of help to the rest of the crew.

Sometime around mid morning we took a break to talk to the family that was going to live in the house. We had candy to pass out and Frisbees and bubbles to play with. I got a Frisbee out of my son’s backpack and noticed that he also had some Hot Wheels cars in there. I got one out and tried to roll it on the ground with a group of boys that we there but they were not real interested in that. Then a saw the tin for the house and started rolling the car on it and they were fascinated with that. There were probably ten kids playing with that one car and everyone was having fun. Check out the video link below (GregMovie) to help better illustrate.  We eventually went back to work and I don’t know what happened to the car or the boys but I never heard any fussing from any of them.

The second house we worked on started a lot faster than the first because we all knew what to expect. There was a boy there that was helping bring tin up to the house site. On one of the trips up the hill he dropped a piece of tin and it cut his finger. After he dropped it he was still trying to pick it back up and get it to the work site. Someone saw he was bleeding and we finally got him to come to us. Some of the guys tried to stop the bleeding and patch him up, but we realized he needed a little more attention than we could give him. Someone from the village was going to take him to the doctor, so I am looking forward to see him tomorrow and make sure all is good.

This was a great day and we are tired but all you hear is the laughter from everyone enjoying their selves and looking forward to what God has in store for us in the morning.

Thank you for all the prayers that are being lifted up for us and the work we are doing. 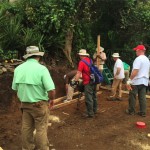 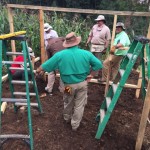 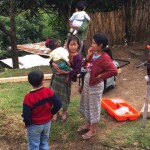 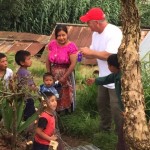 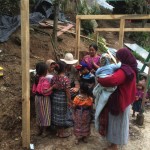 Posted in Birmingham | Comments Off on Rolling Along

Had a great day today here in Birmingham. We had around 80 kids attend our football/cheer camp at Crestway Park. We had about 40 girls that attended the cheer camp and 38 guys that attended the football camp. Tyson Lee presented the gospel to all of the kids during our devotion time and I know that God is working in our leaders and students to come behind him and water those this week. Please pray that the kids hearts will be softened and that Pastor Andy and his congregation will have the opportunity to follow up and reach out to these families. This afternoon we put the first coat of paint on the meeting area that Renovate uses at Crestway Baptist Church. Andy is so pumped and gracious that their Calamine Lotions Pink walls are no more. We will put a second coat on tomorrow and touch up on Thursday afternoon. God bless and I will update y’all tomorrow.

Posted in Birmingham | Comments Off on No More Calamine Lotion Walls